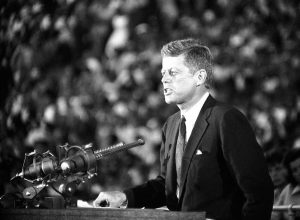 In his fifteen minute inaugural address on January 20, 1961 our 35th President challenged every American to contribute in some way to the public good. His challenge is just as important to us today as it was then.

If you are not currently an Election Judge, I offer a similar challenge to you. Do you know what the cities of Arlington, Azle, Bedford, Benbrook, Burleson, Euless, Fort Worth, Haltom City, Haslet, North Richland Hills, Richland Hill and White Settlement have in common? They all need Election Judges and Election Clerks.

Election Judges are responsible for supervising the Election and serve from 6:00 am to 8:30 pm on Election Day. Clerks assist the voter as they sign in and cast their vote; and, can serve all or part of the Election Day.

Tarrant County Elections needs registered voters like you to serve in 2019 through 2021 as Election Judges at Primary and General Elections.

In addition to being compensated monetarily for your time, you will have the opportunity to give back to OUR community. There is no feeling on earth better than knowing that you took the time to pay it forward. To have a Democrat present at each election site will ensure that each citizen presenting themselves at the poll to vote is treated fairly without fear of being intimidated.

If you haven’t already agreed to serve as an Election Judge, please consider adding the second Tuesdays in March and November to your calendar as “My day to serve OUR Community”.

Please click the button below and fill out this Election Worker Request form. After receiving your form, I will contact you with additional information.

Thank you in advance for your service,

Election judges will be responsible for picking up election equipment for the assigned precinct, marking early voters in the poll book, locating clerks to work at the polls and making sure the election is fair and problem-free.

Election Day is the first Tuesday in March and November, and the first Saturday in May. There is always the possibility of a run-off election in June and/or Special Elections in September.

Working early voting is a possibility, as available. Call the Early Voting Department to be added to the potential workers at least 2 months prior to the election.

Clerks, another type of poll worker, assist the voter as they sign in and cast their vote, and work from 6am-7:30pm or can work partial hours at the discretion of the presiding judge.

Click here to serve as an Election Judge or Clerk.  If you need more information, contact Vera Roberts, Election Judge Liaison, at electionjudges@tarrantdemocrats.org.